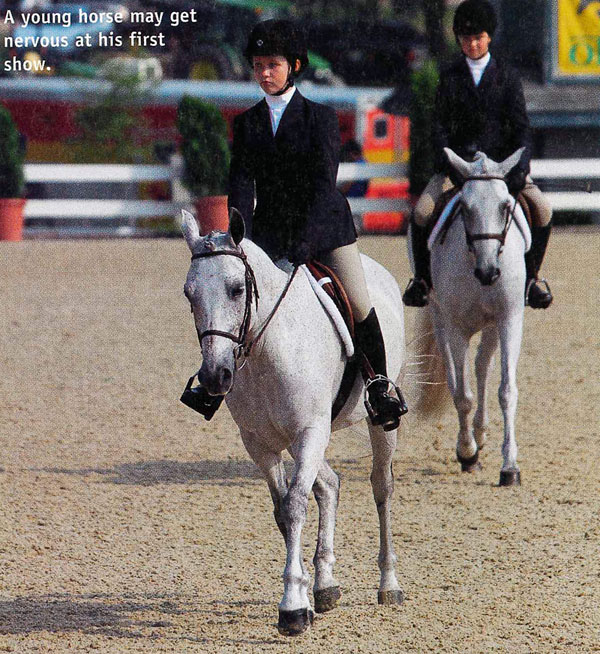 Going to a horse show can be an overwhelming experience for a young or green horse. There’s lots of hustle and bustle at a show. Your horse will be exposed to things like noisy loudspeakers, clattering trailers and unfamiliar horses. It’s a lot to take in, and a young or green horse may panic and misbehave at his first competition.

If your greenie has never been to a show, there are a few things you can do to prepare him for his first outing so that it’s a great experience for both of you. Horse shows should be fun, not scary!

Here are 10 tips to make sure your greenie’s first show is a success.

1. Get your horse used to riding in a group

If a horse is not used to being ridden around lots of other horses, he may panic in the show arena. He could shy away from other horses or act aggressively if a horse gets too close to him. In any case, he’ll pay more attention to the other horses in the arena than you!

Sign up for a few group lessons before you enter a show. Ask the other riders to ride in front of you and behind you. Have other horses pass inside and outside of you. If your horse stays calm around other horses, ask a pal to ride fairly close to you so your horse gets used to arena traffic. Once your horse ignores other horses walking, trotting and cantering by him, he’s ready to go to a show.

2. Teach your horse to load into a trailer

It is very frustrating to lead your horse to the trailer on the morning of a show and he won’t load. If you get into a fight with him, your day will start off badly and the rest of the day may not go well. If you can’t get him in the trailer, you’re not going to the show and you may lose your entry fees.

This annoying scenario can be avoided if you teach your horse to load before you head to a show.

Practice loading your horse into a trailer several times a week until you are completely sure he’ll hop on to the trailer on show day.

3. Take your horse off the farm

It’s important that your young horse gets used to traveling off the farm and being ridden in new places. Arrange to have a lesson at another barn or pay a schooling fee to ride in another barn’s arena. If you have friends with horses, ride with them at their barns.

If there’s a state park with trails near your barn, load up the trailer and head out for a trail ride with some horsey friends who have reliable trail horses.

If there’s a sponsored charity ride in your area, sign up and ride with a friend who has a quiet horse. Once your horse is calm in new situations, he’s ready to go to a show.

Plan a few practice runs before you send in any entry fees. Take your horse to a few shows, but don’t show him. Hitch a ride with a friend to a show or take him yourself. You may have to pay a schooling or shipping in fee, but it will be worth it.

If you’ve paid a schooling fee, you should be able to saddle him up and ride him around the showground. If he acts silly, it’s safest to hop off and lead him around in hand.
Let him stand for a while tied to the trailer. Give him a hay net full of hay to munch on. He needs to get used to standing around at shows. Also put him in the trailer with some hay and let him chill out inside for a bit.

If your horse is very nervous and stressed out at the show, you must take him to a few more events until he’s calmer before you actually compete.

Choose a small, unrated show for your first competitive outing. If you have a trainer, talk to her about which classes would be suitable for you and your horse. You don’t want to over-face your horse at his very first show.

On show day, leave the barn early so you have plenty of time to walk around the show with your horse and to warm up. If you’re late and have two minutes to tack up, both you and your horse are going to be stressed out as you enter the arena. If you’re relaxed and calm at your horse’s first show, chances are he’s going to be mellow too.

Don’t enter 500 classes at your horse’s show either. We know you want to win a ribbon or two, but stick to two or three classes on your first outing. Don’t wear out your poor horse!

The warm up area can be a stressful place for a young horse. There are horses coming at him from every direction, and not every rider is as courteous as he or she should be. You may get cut off when someone rides in front of you. Or your horse could get bumped by another horse that gets a bit too close.

Warm up in the quietest part of the arena and try to avoid other horses if you can. Stay alert and be aware of what’s going on around you at all times. Try to pass people approaching you left shoulder to left shoulder and don’t tailgate other horses.

If you plan to pop over a few fences in the warm up area, let other people know you’re heading toward the fence, by saying something like this, “Brick wall, please,” and polite people should stay out of your way.

If you’re competing in a flat class, try your best to stay away from other horses. Cut a corner if you have to or ride across the arena to get to an open space. Don’t do too many circles, though, because the judge may think you’re having problems with your horse.

If another horse seems grumpy or pins his ears as you pass him, give him plenty of room.

Listen for the judge’s commands and take a deep breath before you ask your horse to change his gait. He should be going forward nicely and calmly before you give him a cue.

When the judge asks you to line up at the end of the class, choose a safe spot. Don’t squeeze between two horses because this may worry your horse.

If you’ve prepared your horse properly, he should be well behaved at his first show. But as we all know, horses can humble us! Even the quietest horse can misbehave if he feels threatened or overwhelmed.

If your greenie is acting naughty in the arena–bucking, rearing, or kicking out at other horses—bring him back to a walk and ask the judge or steward if you can be excused from the class. You don’t want to put other competitors at risk and it’s best to solve behavioral problems at home with your trainer. Just smile, thank the judge and leave the arena.

Don’t dismount though. Head back to the warm up arena and work with your horse for a while. Try to figure out what’s bothering him and school him until he’s calmed down. Be sure to end the ride on a good note.

Don’t worry too much about your greenie’s show day jitters, the more experienced he becomes at showing, the better behaved he’ll become.

How to Tack Up for Western Riding