If you plan to show your western horse in reining classes, you’re going to have to teach him how to do flying changes. You probably won’t be asked to do them in “beginner or green as grass” classes, but as you and your horse become more experienced competitors, you’ll have to switch leads while changing direction in the center of the arena. You can’t slow down to a jog and then ask your horse to do a simple change. He must change leads on both his front and hind legs in the same stride. It’s almost like he’s changing leads in mid-air.

Before you start teaching your horse how to do a flying change, it’s important that he masters other vital western movements like turns on the forehand and two tracking first. Once he can do these moves correctly, you’ll find it easier to teach your horse the flying lead change.

Turns on the Forehand
A turn on the forehand is when your horse’s front legs remain planted in one spot while his back legs step around. His rear end moves around his front end. Doing a few turns on the forehand during schooling sessions teaches your horse to move away from your leg when you apply pressure to his side. If your horse doesn’t respond to your leg, you’ll never nail the flying lead change. 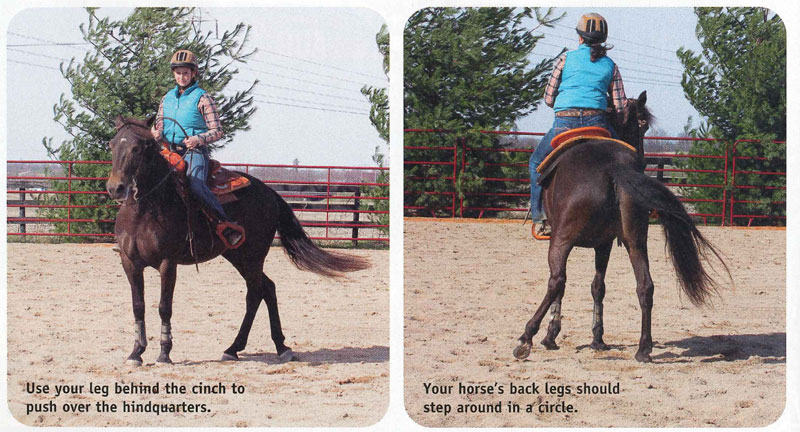 Pull up your toes, push down your heel and squeeze your right leg against your horse’s side or bump it against him softly to ask him to move his hindquarters to the left.

To do a turn on the forehand to the right, tip his head slightly to the right and press with your left leg behind the cinch to ask him to move his hind legs to the right.

Two-Tracking
Two-tracking is a combination of going forward and side passing. Your horse’s forelegs and hind legs cross over as he goes forward. Once again, your horse has to move off your leg quickly to do this movement successfully. 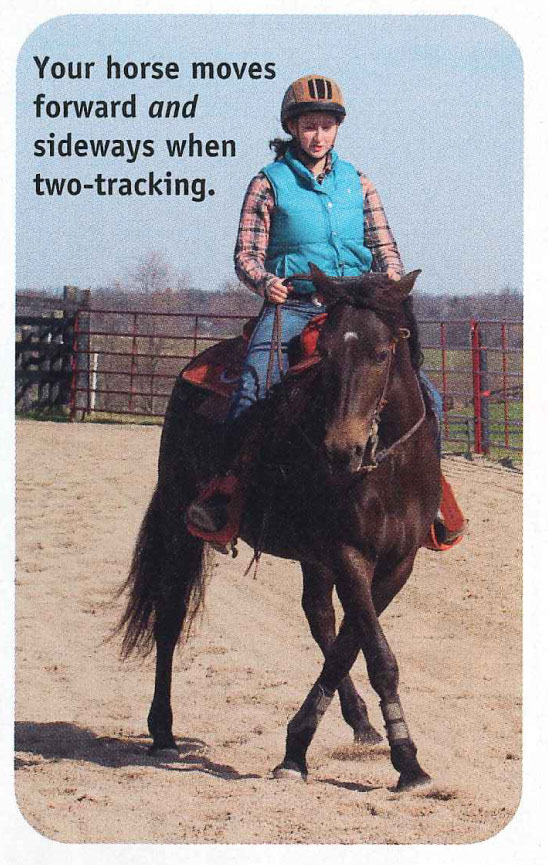 Remember that your horse should move forward and sideways at the same time, and always two-track in both directions during a schooling session.

Teach two-tracking gradually. If your horse takes a couple of lateral steps, reward him by walking straight forward again. Don’t ask a greenie to two-track across the entire arena!

Lead Departures
It’s important that your horse is a pro at regular lead departures before you ask for flying changes. If he’s unbalanced and runs into his lead departures or picks up the wrong lead every other time, you’ll never be able to do the more complicated flying lead change. 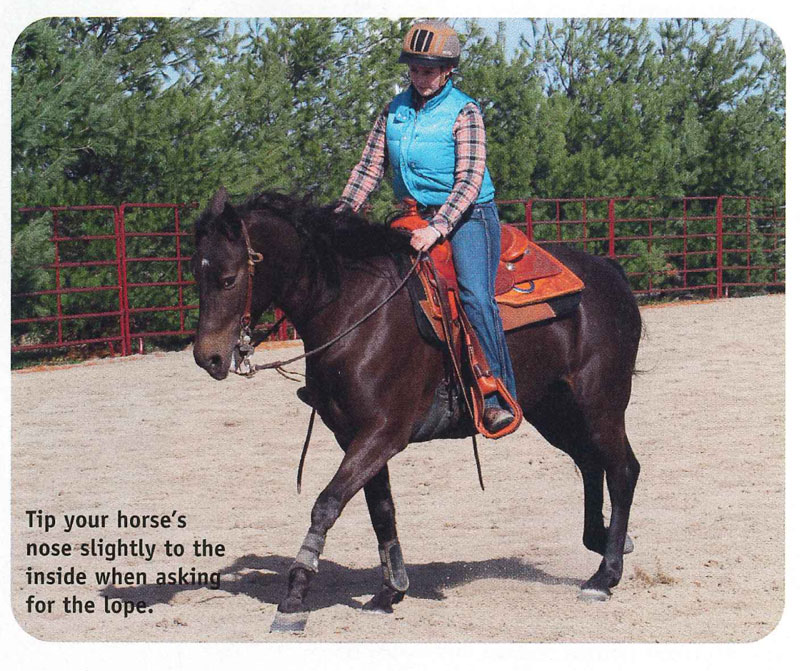 Before you teach your horse flying changes, your horse should be able to pick up the lope from the walk. Reining patterns don’t include the jog—all work is done at the lope or gallop. To ask for the lope from the walk, make sure your horse is walking in a forward, active pace. Use both hands to take up some of the slack in the reins and tip his head slightly to the inside. You should be able to see the corner of his eye. Any more and you’re bending him too much. Sit deeply in the saddle and press your outside leg to your horse’s side. Keep your inside leg at the cinch. Slide your outside leg back a few inches and apply pressure. If he doesn’t respond immediately, give him a bump with your calf. Your horse needs impulsion for a good lope departure.

Asking for a Flying Change
Work in a figure-eight pattern with a short, straight line in the middle. Use both of your hands. Pick up the lope to the right and circle twice. When you reach the straight part of the figure-eight come back to the walk and do a simple change of lead. Keep your inside leg next to the cinch and swing your outside leg back behind the cinch and bump him for the lope. Then circle to the left twice.

Next, try for the lead change without coming back to the walk. Circle to the right again at the lope and when you reach the straight part of the figure eight, collect your horse by lifting your left hand a bit and swing your right leg behind the cinch to encourage him to bring his hindquarters to the inside of the circle. Then, give your horse the cue (applying strong pressure or bump) to change to the left lead.

When you’re loping to the left, as you enter the straight part of the figure-eight tip your horse’s head to the right, lift up your right hand and move your left leg behind the girth and give the cue for the right lead. 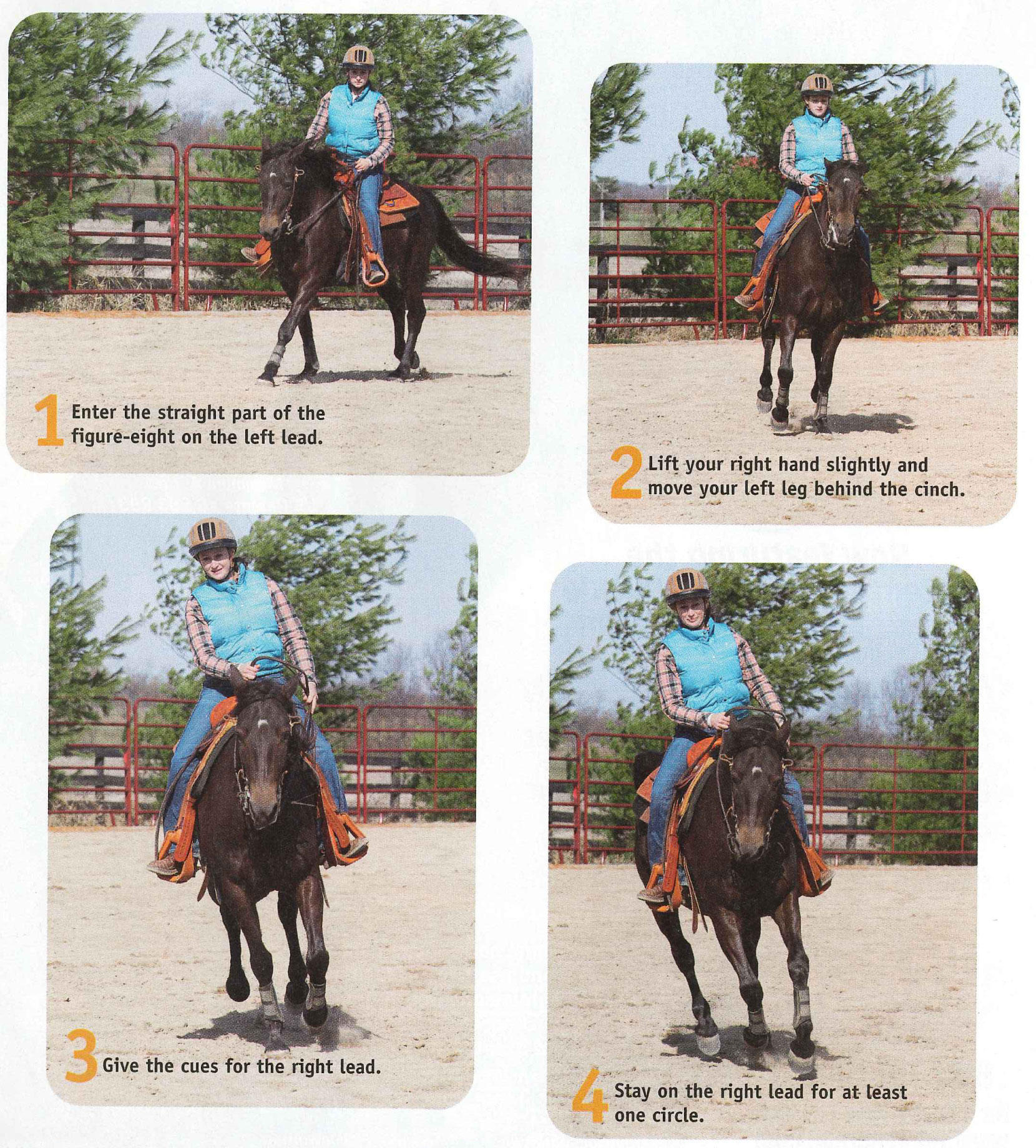 You may need to exaggerate your departure cues so your horse knows what you want him to do and it may not be pretty the first few times you attempt a flying change. Flying changes can be difficult for a horse, so if you’re having major problems, sign up for a few lessons with an experienced western trainer to get some help.

Thanks to our models Jessica Heskel and her Connemara Pony, Mt. Prospect’s Irish Rogue.