How horses and riding are sometimes the cause of heartache, and sometimes its cure. Read on to learn more about horse riding through a breakup.

Things were feeling desperate when I submitted that search query and scrolled the mostly unhelpful results. I’d been feeling like I was finally making some progress in my slow-moving journey into the sport of eventing. But then I had a fall in December that left my hip, back, and confidence bruised. A month later, a slow-motion fall due to some too-defensive riding on my part reinforced my self-doubt.

On top of that, I had to stop riding my 29-year-old Morgan, Snoopy, several months earlier after he started displaying neurologic symptoms. I hadn’t been riding him much anyway, but we’d go for an occasional no-stress hack around the farm. Without that, my riding was restricted almost entirely to jumping lessons on a rotating cast of lesson horses. My very patient trainer was accommodating of my nerves, but I still pulled up to the barn for every ride with clammy palms and a mild feeling of dread.

I pay to do this, I’d tell myself. Why do I keep feeling like this if it’s supposed to be fun?

Sports psychologists don’t come cheap, and frankly, I felt a little silly for thinking about seeking professional help to fix my brain for a sport I participate in as an amateur, at the lowest possible levels, and only barely competitively. So I abandoned that plan. Things didn’t get better.

Snoopy’s symptoms got worse in January, just as the owners of his two simpatico pasture buddies announced their plans to move to a different farm.

I worried about how he’d cope without his friends—a Friesian sport horse who towered over him but deferred to his authority and a stoic Quarter Horse who would literally put himself between Snoopy and the other horses when things got a little rowdy. He’d be left with two bossy Thoroughbred geldings that sometimes liked to stir up trouble and no bodyguard to protect him in his impaired state.

Every day he’d walk in crookedly to get his meal of soaked feeds to accommodate his aging teeth. I’d turn him back out and he would stay right by the barn door with his head down, ignoring the other horses. I left the barn wiping tears from my eyes every day, watching him stand by himself, unmoving, in my rearview. It felt like a very long, slow march toward the inevitable, and the anticipation of having to make the decision every horse owner dreads got heavier with each visit to the barn.

He’s still here, I told myself as I left the barn one day. I don’t know how much longer he’ll be here, but he’s here now, he’s not in pain, and I am thankful for every day I get to see him. The last day might be soon, but until that day comes, there’s no reason to cry. So stop it.

Meanwhile, I committed myself to making progress as a rider in the year ahead. I started leasing a favorite lesson horse, Jekyll, who had a long show career behind him and seemed up to the task of carting a nervous amateur around all three phases of eventing. The predictability of riding the same horse every week alleviated the weight on my chest. Jumping even started to be fun again.

And Snoopy adapted. His symptoms got less noticeable. As the spring grass started to reappear, he was no longer glued to the barn door every day. I looked ahead to a summer of making progress with Jekyll’s help and letting Snoopy enjoy his retirement days. I hadn’t shed a tear in months—until my boyfriend of 13 years told me we needed to split up.

I didn’t see it coming. The ground disappeared from underneath me. I was floating in space while he said something about parallel lives, more like roommates than partners, not being able to support each other in our respective and very unrelated passions. I told him I wanted to try to work through these things. He looked down and shook his head and said he just didn’t see a future together.

My vow to not cry as long as Snoopy was still around ended that day.

Internally, I had to do a lot of soul searching. Maybe I had gotten comfortable and took our relationship for granted. I knew we led parallel lives but I thought it was an asset. I’d arrogantly scoff at the husbands and boyfriends who hovered around at the barn or at shows, sometimes helping but other times looking out of place and bored.

Why don’t they get their own hobbies? I’d think, feeling confident that the fact that my own non-equestrian partner was off pursuing his own interests while I pursued mine meant that we were some sort of relationship geniuses who had figured out how to do it right. When other women talked about their significant others complaining about the amount of time they devoted to horses, I shrugged, thinking about how mine didn’t even notice when I was at the barn all day. What in hindsight appeared as a giant flashing warning sign had seemed like a good thing at the time.

A few days after the breakup, I was tacking up for a lesson when a friend said that I looked kind of pale and asked if I was OK.

“I’ve had a really hard week,” I said, and then burst into tears as I led my horse out of the barn. I’d hardly eaten in days and had spent most of the morning crying. I barely had the energy to hold myself upright in the saddle. I knew riding a horse through a breakup was going to be difficult. That lesson consisted of my instructor lowering all the jumps for me and giving me more and more rudimentary instructions on how to get around the ring in survival mode as I failed my way through the hour. I saw my plans for the season ahead disintegrate in front of me.

Riding through a breakup: Practicing Mindfulness

“It’s OK to go through the motions,” my therapist told me.

I’d finally found my way to a counselor. Although instead of helping me with equestrian anxiety, I sought some guidance on getting through the day while feelings of hurt and sadness, guilt and betrayal swarmed around me like persistent, malevolent ghosts.

And going through the motions is exactly what I did, showing up dutifully to every riding lesson and signing up for every schooling show while my brain was consumed by worries about finding a new apartment, disentangling my life from that of the man I’d lived with for nearly a decade, and contending with profound loneliness.

One day I went for an evening hack on Jekyll. My mind was fully occupied with the stress of my hunt for new housing, and anger at the fact that I had to move out because my ex had made a unilateral decision to move on. And in the middle of a thought about how unjust things were, I saw the ground coming at me. Jekyll had spooked at some nothing next to a trailer and taken a quick step to the side.

It was a maneuver I would have easily been able to stay with had I been paying any attention at all. Jekyll forgot his fear and started grazing as I stood up and glanced at the arena to see how many members of the group lesson in progress had seen my unscheduled dismount.

As I led Jekyll back to the mounting block to start again, I thanked him for the life lesson, and vowed to be more mindful at the barn, especially while riding.

I’m so lucky to be able to come out here and be around horses, I thought. So when I’m here, I need to be here.

Riding through a breakup: Adaptation

This year didn’t turn out to be what I expected. My dog and I moved into a new apartment in a new neighborhood and we’re still adjusting. I still feel sad a lot. I still feel hurt.

I’m discovering that a lot of the existential angst I’m feeling now isn’t so much a product of being dumped as it is stuff that I’ve been carrying around but was able to ignore when my life was calm and comfortable. I’ll admit I haven’t experienced much adversity in my life; having it torn apart has been revealing as I try to figure out how to build it back better.

I thought this would be the year I finally had the wherewithal to focus on my riding and maybe move up a level. Instead, I’m still going through the motions, but I’m starting to see that in the long run, that’s a better course of action than succumbing to the desire to hole up alone and feel sorry for myself while the days pass me by.

My big goal show for the year was in May. I spent a lot of that weekend letting Jekyll hand graze away from everyone else while I let the tears flow freely. But when it was time to go in the ring or on course, he was all business and so I had to be, too.

We completed with a second place finish in our division, and while it didn’t solve any of my problems, being there forced me to focus on something else for a while. It reminded me that I’m still the person I always was: someone who loves horses and riding and showing and who wants to keep getting better despite sometimes crippling nerves and a relatively late-in-life introduction to jumping.

And some days I have to drag along this heavy weight of hurt and sadness as I pull on a pair of breeches and go to my lesson. I’ve found that once I’m there and it’s time to ride, my mind doesn’t stay in that dark place. For an hour or so, I’m not a heartbroken 30-something navigating adult life alone. I’m a rider. I’m myself.

As for Snoopy, he has adapted to his circumstances better than I ever would have expected back in January. His gait is still pretty lopsided some days, but he gets around just fine. His old friends left, but he’s found a new one in yet another Thoroughbred gelding who recently joined his herd. I usually find them grazing side by side when I arrive at the barn. Proof that while companions may come and go, there’s always the potential of finding a new kindred spirit.

Snoopy is 30 now, and every day with him is a gift. But when I see him now, I see his bright, alert eyes and his famously expressive ears more than his off-kilter stance. I don’t cry over him anymore. I don’t have to cry. He’s still here, and so am I. 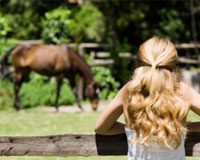