Home Equestrian Lifestyle Your Horse Life: The Definition of Insanity

I’ve heard it said that insanity can be defined as “doing the same thing over and over, yet expecting a different result.” If you look at it like that, then the horseback riding and the codependency business both have an element of crazy, but to different degrees. In both cases, someone on the outside might look at what’s going on and think, “That is some crazy stuff.” Are they riding that horse correctly? The thing with horses is, while it looks like the same thing is happening over and over again, it actually is not. 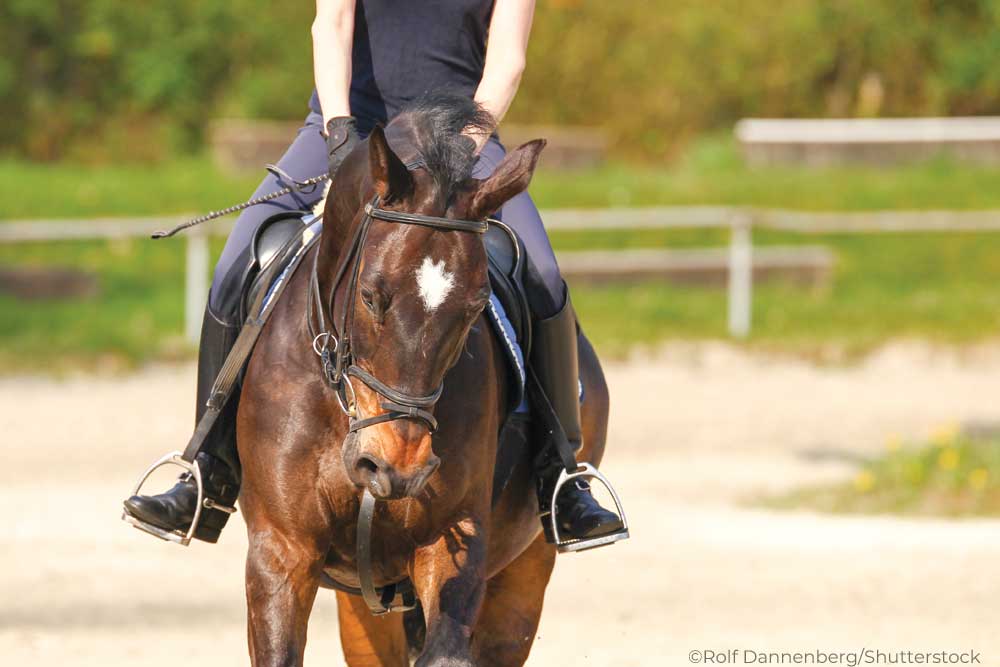 For example: I had one lesson in which all we did was circles, in trot, for 30 minutes. We rode 20-meter circles at one end of the arena, at the other end, in the center, on the left rein, on the right rein; the instructor even split us up (there was a half-dozen in the lesson) so that we made two cycling groups of three at opposite ends, passing each other in the center. Round and round and bloody round we went, making the adjustments that were suggested (shouted) from the ground, and when it came time to dismount, we all wobbled on our thoroughly jellied legs, and if we’d gotten one correct circle out of it, then there was cause for celebration.

Notice I said “correct.” Not perfect. That’s where the madness of horse riding is different from the insanity of codependency, which knows nothing of doing things correctly, only perfection.

Notice I said “correctly.” Not perfect. That’s where the madness of horse riding is different from the insanity of codependency, which knows nothing of doing things correctly, only perfection.

If one were behaving correctly in a relationship, then the lunacy of codependence wouldn’t even get a chance to put its feet under the table. Correctness in this case has to do with balance, with a healthy give-and-take, and a blend of reliance and independence.

I behaved incorrectly in order to mitigate incorrect behavior, and at first, it was fine, because I thought I was creating lasting solutions; instead, I was putting a band-aid on a broken leg. I sustained a level of fear and anxiety that gradually became detrimental to my health and well-being, which had not only to do with my reactions to his actions and choices, but also with my insistence on solving problems that were coming thicker and faster as the years went on.

Eventually my need to be “perfect” began to turn into a need to be “correct”—even though I maybe didn’t understand it at the time.

In one private riding lesson (I was the only student), I worked Joxer, my assigned horse, in figures of eight for 35 minutes. Over and over. In walk. Not trot, not canter, but slow, steady walk. The purpose of this exercise was for me to improve what are called “the aids”—specific signals conveyed via the rider’s seat and legs and through the reins that tell the horse what the rider would like him to do. In the figure of eight, I was persuading Joxer to flex and bend, that is, to become supple through his neck and body as we went around the curves.

slowly but surely, I was getting better at asking for what I wanted, gently and assertively, and the result was immediate.

Again and again we changed direction in the center of the figure of eight, from the left to the right and back again, with me using my seat and my legs to encourage the bending and flexing I was informed I desired. When it was correct, there was no mistake: Joxer’s head dropped down so that his neck was a straight line from his back to his withers to his nose; I could see a hint of his inside eye, meaning he was looking in the proper direction; I could feel his footfalls, stepping effortlessly. I knew what to shoot for, and doing this one thing, this figure of eight—over and over, with varying degrees of success—was deeply satisfying: slowly but surely, I was getting better at asking for what I wanted, gently and assertively, and the result was immediate. 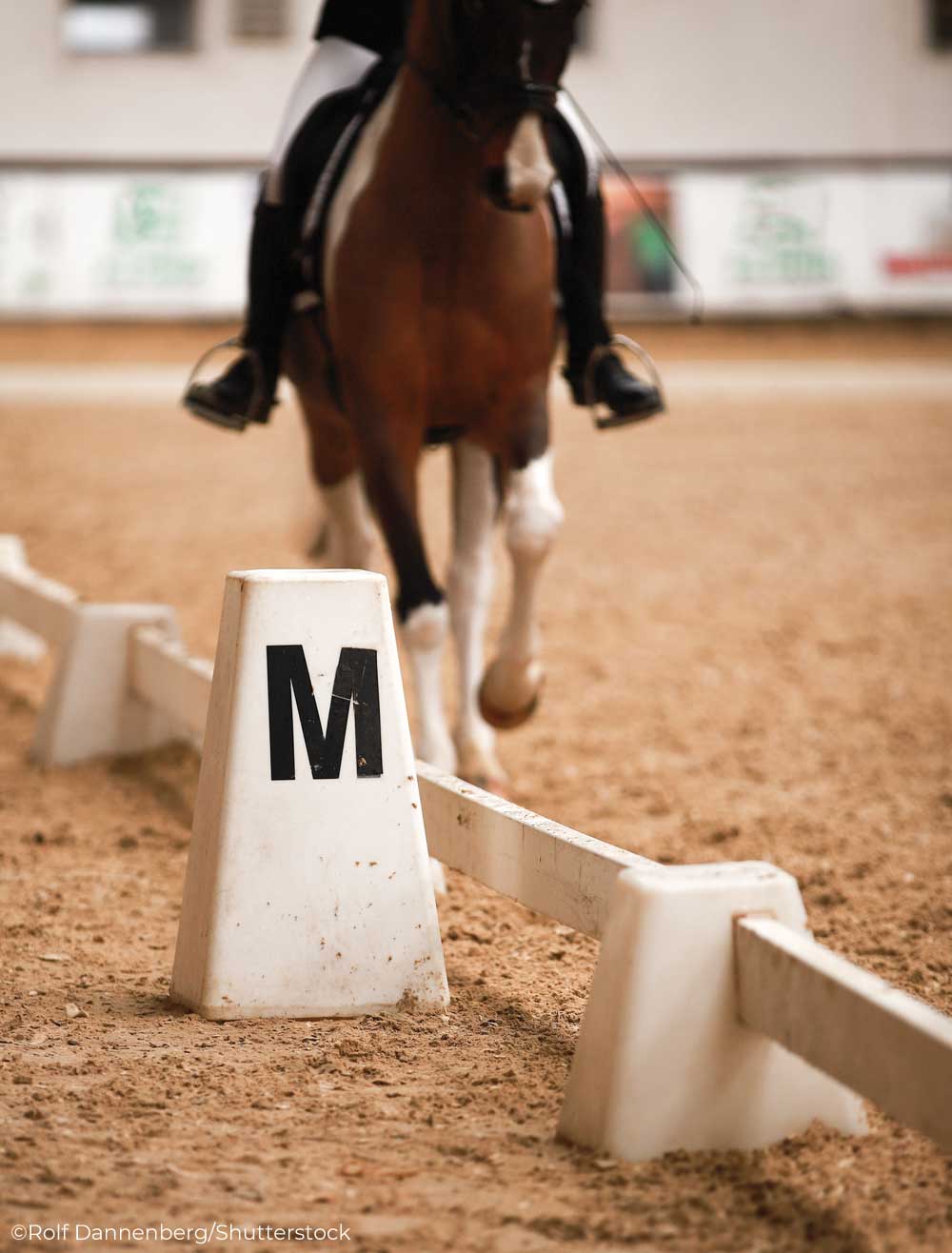 I used to pay all our household bills, over and over. Rent, electric, gas, landline, both cell phones. I would keep track of the figures, write them on a Post-it note, and hand it over to my husband. The Post-it note would go missing, which wasn’t a problem, because even if I hadn’t written down the figures anywhere else, you can rest assured I kept a running tally in my head.

I would do this, again and again, because we were a couple, and what if one month I couldn’t meet my responsibilities? I certainly hoped that I could rely on him to cover for me! If he couldn’t pay half the bills, it wasn’t a big deal, because next month it would all be fine. He’d find a new job and it would be better, he’d be happy in the work, the people would be less difficult, and he’d start to contribute. Next month, everything would change.

You put on that inside leg to encourage the horse to bend his body around it; meanwhile, you try desperately not to yank on the inside rein so that horse is looking inward, because even though that’s where he’s supposed to be looking, yanking is the incorrect way to get him to do it. In fact, yanking makes things worse, as it encourages the back end of the horse to swing out and all of a sudden you’re practically going sideways. So you increase the pressure from the outside leg to bring the hindquarters back into alignment, and shift your body’s center just a little bit to further encourage that bend, and you try on top of all of this to ride your own circle and not just blindly allow your horse to follow the horse and rider in front of you, because the leader may be a horse that likes to start cutting in, making the circle smaller so he’s done with it more quickly.

Why would you worry about the horse if you’re doing all the things you’re meant to be doing while riding, correctly?

Also, you have to somehow manage not only to keep your hands up (reasonably up, not up around your ears, but not down in your lap, either) and your heels down (with the stirrup on the ball of your foot) and your toes pointing in, shoulders relaxed and down, chin somewhere between not too up and not too down, neck tucked back into your collar, all without worrying about the horse, because why would you worry about the horse if you’re doing all the things you’re meant to be doing while riding, correctly?

Written out like this, it all sounds entirely insane.

How did you get here?

If you were me, then one day you woke up and decided that you needed to be around horses. It was the proverbial bolt from the blue. You’d never even touched a horse in the whole of your life. So you bought books about them and you looked for a “horse place” that was nearby so you could maybe go look at them, in real life, and try the “whispering” and whatnot you’d read about. Then, over the course of the next year or so, your marriage began to implode, so you decided to forget about the nutty horseback riding notion. But you didn’t really. It wouldn’t let you.

That idea of horses wouldn’t go away. So, three months and four days after I left my marriage for good, I booked myself a real horseback-riding lesson. 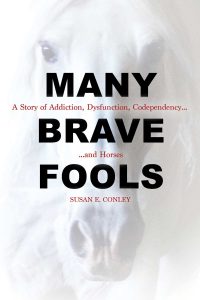 An excerpt from Many Brave Fools by Susan E. Conley, reprinted with permission from Trafalgar Square Books (www.horseandriderbooks.com). 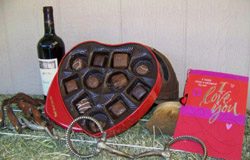