As the inaugural Great Santa Fe Trail Race winds down–after nearly two weeks of competition across 800 miles of America’s heartland—history and tragedy have replayed. On September 11, as two competitors crossed the race day’s finish line near Canton, Kansas, they collided with an oncoming vehicle. The riders were identified as Teresa Wilcox of Chadwick, Mo., and Sandy Olsen of Edmond, Okla. Their horses, Mr. Valentine and Foxfire, died at the scene. The riders, as well as the vehicle’s driver, are all expected to recover from injuries sustained during the accident.

There is debate between event organizers and the two injured riders as to how and why the accident occurred. Rob Phillips, the Great Santa Fe Trail Race organizer and founder, says the women had passed the day’s race finish line and were struck about a half mile after crossing. Phillips claims the finish line was clearly marked and he’s not sure why the women continued riding on a black top road that was not part of the race’s trail.

“We take it as a very serious incident,” Phillips says. He explains that further details will be provided after a thorough investigation by local law enforcement concludes.

In a press statement from her hospital bed at a Wichita hospital, Wilcox, who was riding Mr. Valentine, said, “We weren’t sure where the finish line was. We assumed it was right there.”

The Great Santa Fe Trail Race is attempting to recreate history. In the summer of 1848, a French Canadian named Francis X. Aubry won a $1,000 bet by quickly traveling on foot and horseback 800 miles, from Santa Fe, N.M. to Independence, Mo., in 5 days and 16 hours. At that time, his was the fastest trip ever made between the two cities.
But according to the Kaw Mission State Historic Site in Kansas, the trip wasn’t kind to the horses: Six died along the way.

Dubbed the Great Santa Fe Trail Race because it winds across the national historic Santa Fe Trail that Aubry rode, the inaugural event began on Sept. 3 in Santa Fe, N.M., and concludes Sept.15 in Independence, Mo. Unlike Aubry’s ride, there have been stops along the way: Each day has marked a separate race, with a start line and a finish line.
Race winners are determined by tallying each day’s race times. The rider with the shortest time overall will be declared the winner. In addition to an individual winner, team competition exists.

According to Phillips, the race is sanctioned by the American Endurance Ride Conference. Before the race began, Phillips explained the precautions being taken to ensure equine safety. “Each day there will be a pre-race vet check, two vet checks during each race, and a post-race vet check,” he said. “We don’t want to lose any horses.” 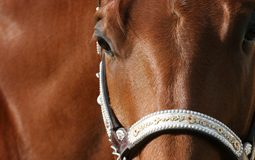