Gold is definitely a color that looks good on American equestrian athletes, and Team USA’s dressage squad is wearing gold after a big win at the 2007 Pan American Games in Rio de Janeiro. The three-member team comprised of Lauren Sammis, Katherine Poulin-Neff and Christopher Hickey clinched gold by finishing their combined work  with an average score of 68.633 percent. Canada took the silver medal (67.250 percent) and the host country—Brazil—was awarded the bronze medal on a score of 64.933 percent.

Poulin-Neff was the first of the Americans to enter at A, and aboard Brilliant Too, she scored a 66.550 percent, very respectable for a horse that had yet to experience the atmosphere of such a large event.

“I felt good about the test,” she continued. “There was one little mistake at the end—a flying change. I corrected it, but overall he [Brilliant Too] felt good. I thought he would be more nervous in there…but, overall, I was really happy.”

“I’ll be more relaxed next time,” she said, referring to the upcoming Individual finals that run through tomorrow. Overall, the pair finished the Individual 1st Qualifier in sixth place.

Then, the gold medal came down to the scores for Hickey riding Regent, and Canadian Andrea Bresee aboard Raffles.

Hickey and Regent wrapped up the American effort and scored a 69.150 percent, which sat them in second place overall. Bresee’s 65.250 percent secured the silver for her country.

“I made a few little mistakes, and part of those were rider error…going for it a little too much,” Hickey said. “But, I’m very happy with our ending score, and to be able to represent the U.S. team. We’ve had a wonderful time here in Brazil.”

Hickey’s mount, Regent, was fresh entering the ring today, yet some gutsy chances were taken during the test and few mistakes were made. “I was a little overzealous trying to make him more expressive, and I could have ridden him a little calmer,” Hickey said. “That is one place where I rode too much, and tried to make him higher in the neck and little more forward over the ground with more expression. It didn’t work today.” Regardless, his efforts were enough to secure the medal.

Sammis spoke for the team when she shared her enthusiasm for the competition and her appreciation. “The way that this show has been run has been fantastic, and the reception from the people has been fantastic,” she said. “We are so very grateful to be here as a team.”

Team USA chef d’equipe Klaus Balkenhol was obviously pleased. “Considering that all of these riders are riding in a large international event for the first time, each and every one did a fantastic job,” he said. “I am thrilled that these riders were able to get the gold medal. I also want to thank to everyone—the grooms and the others who worked together…that’s really important.” 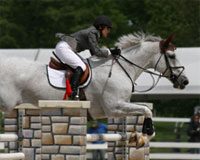