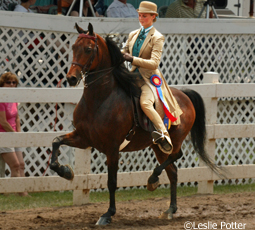 In 2011, United States Equestrian Federation (USEF) then-President David O’Connor announced that the Federation would support and develop a national team for the sport of saddle seat equitation. Although not a widely known sport around the globe, there are a handful of nations where saddle seat has a strong foothold. As the national governing body for equestrian, the USEF stepped up to help support saddle seat athletes with aspirations to compete at the international level.

Since 1992, the biannual Saddle Seat Equitation World Cup has brought riders from the United States, South Africa, Canada, Great Britain, Namibia, Germany and Sweden together for the sport’s premier international competition. Every World Cup year, a tryout is held to select the team, but the team only exists for that one competition, and no team is established or trained in the off years.

This weekend, a new saddle seat equitation competition is taking place at the equestrian center at William Woods University in Fulton, Missouri. Called the U.S. Saddle Seat Invitational, this competition is the result of O’Connor’s pledge to support the sport at the national and international level. Riders from the U.S., South Africa and Canada will compete in three-gaited and five-gaited divisions over the course of two days. Similar to intercollegiate competition, riders will draw horses from the pool of William Woods school horses so that all competitors are mounted on horses they have never ridden before. Each rider will be judged on rail work and pattern work on at least two different horses.

The competition will be broadcast live online at USEFNetwork.com on Friday, April 5 and Saturday, April 6.