The Bulldogs won the first two points of the hunter seat final, but Auburn evened it out and the score was 2-2 after equitation on the flat. Over fences wins from Jennifer Waxman and Elizabeth Benson (who also earned a point On the Flat) and a tie from Quincy Hayes meant that Auburn would win the Hunter Seat National Championship and force a ride off for the overall NCEA National Championship.

First up in the ride off were the teams respective Hunter Seat stars Elizabeth Benson (AUB) and Carly Anthony (UGA) competing On the Flat. Benson took the point 194-188, but Georgia answered back with Paige Stawicki (UGA) defeating Griffin Knight (AUB) 144.5-138 in Horsemanship. Benson added another point in Equitation over Fences (bringing her point total for the day to an astonishingly efficient 6 points) by beating Anthony again, this time 170-110. On the last ride of the night, in Reining, Auburn’s Cheyenne Cracraft earned a 143.5 to defeat McKenzie Lantz’s 138.5 and boosted the Tigers to the NCEA National Championship.

In the Western bracket, number one seed Oklahoma State showed their strength and finished off a stellar season with a 6-2 win over Kansas State. The championship match started with Horsemanship and it pretty much ended there. The Cowgirls earned three scores over 150 and the team of Lauren Halvorson, Marissa Dalton, Lindsey McMullen, and Katy Khrska swept that phase of the competition 4-0. Jenna Blumer and Katy Krhska earned points for the Cowgirls in Reining and put the icing on the cake. For a Cowgirsl Western team that finsished 14-2 on the season, and helped OSU earn a Big 12 title, the National Championship was just about the only imaginable ending to an already great season. But that didn’t make it any less special.

“Its kind of unreal right now,” senior Marissa Dalton said. “It’s great though, I never thought it would happen because we have always been told we’re a great team but we could never pull it together when it mattered.”

Echoing that sentiment was Krshka. “It doesn’t quite feel real yet,” she said. “I feel really honored to be with this group of girls to achieve this goal that we have had all year.” 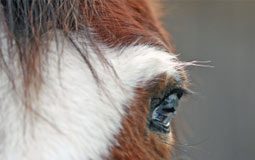